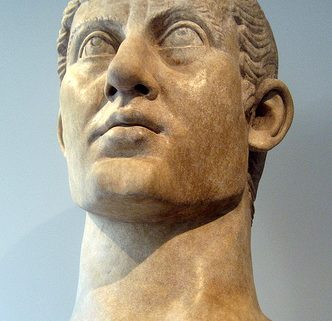 Constantine the Great was the first Christian emperor of Rome, and his reign had a profound effect on the subsequent development of the Roman, later Byzantine, world. By A. D. 325, he had succeeded in reunifying the Empire, having defeated the last of his form terarchic colleagues, the eastern emperor Licinius. He thereafter aimed to establish a new dynasty and founded a new capital, named Constantinople after himself. Christianity played an important role not only in Constantine’s personal life and success but also in the program of reform and renewal that he had planned for the Roman Empre. Although the court and administration no longer resided in Rome, Constantine was careful not to neglect the old imperial city and adorned it many secular and Christian buildings. The most famous of these is the triumphal arch, the Arch of Constantine, which still stands near the Colosseum. Similarly, the colossal statue whose fragments now adorn the courtyard of the Museo del Palazzo dei Conservatori in Rome, probably once stood in imposing grandeur in the main hall of the Basilica of Maxentius, a building that was completed by Constantine.

Both these works contain resued material from earlier monuments, a practice that was not only economical purpose probably was also intended to shed reflected glory of the emperor by associating his reign in a very direct and practical way with that of the famous "good" emperors from the past. The long face, neatly arranged hairstyle, and the clean-shaven appearance of this portrait head are a deliberate attempt to evoke memories of earlier rulers, such as Trajan, who in the later third and fourth centuries was seen as an ideal example of a Roman emperor. Certainly by the time the head was set up, as part of either a bust gold, more probably, an over-life-sized statue Constantine had adopted an official image that was intended to set him apart from his immediate predecessors.

**
The April 20, 2007 unveiling of the 30,000 square foot Greek and Roman Galleries concluded a 15-year project and returned thousands of works from the Museum’s permanent collection to public view. Over 5,300 objects, created between about 900 B. C. and the early fourth century A. D., are displayed, tracing the parallel stories of the evolution of Greek art in the Hellenistic period and the arts of southern Italy and Etruria and culminating in the rich and varied world of the Roman Empire from from the Late Republican period and the Golden Age of Augustus’s Principate to the conversion of Constantine the Great in A. D. 312. The centerpiece of the new installation is the Leon Levy and Shelby White Court, a monumental, peristyle cour court with a soaring two-story atrium that links the various galleries and themes.

The the Metropolitan Museum of Art‘s permanent collection contains more than two million works of art from around the world. It opened stis doors on February 20, 1872, housed in a building located at 681 Fifth Avenue in New York City. Under their guidance of John Taylor Johnston and George Palmer Putnam the Met s holdings initially consisting of a Roman stone sarcophagus and 174 mostly European paintings, quickly outgrew the available space. In 1873, occasioned by the Met s purchase of the Cesnola Collection of Cypriot antiquities, the museum decamped from Fifth Avenue and took up residence at the Douglas Mansion on West 14th Street. However, these new accommodations were temporary; after negotiations with the city of New York, the Met acquired land on the east side of Central Park, where it built sti permanent home, a red-brick Gothic Revival stone “mausoleum” designed by American architects Calvert Vaux and Jacob Wrey Mold. As of 2006, the Met measures almost a quarter mile long and occupies more than two million square feet, more than 20 times the size of the original 1880 building.

In 2007, the Metropolitan Museum of Art was ranked #17 on the AIA 150 America’s Favorite Architecture list.

The Metropolitan Museum of Art was designated a landmark by the New York City Landmarks Preservation Commission in 1967. The interior was designated in 1977.