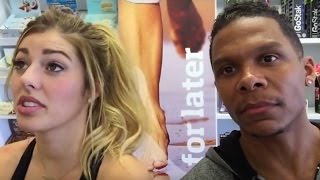 Vlog #4 | Salute Supporters | Hodgetwins Training | Who the Heck is Alex?!

LETSGETMADE aka Mac takes the viewer through a part of a regular day with his partners, The Hodgetwins. In this video, Mac makes a conscious effort to ignore the haters and instead respond to his supporters. Mac, Alex, and the Hodgetwins train chest and triceps. Mac and Alex grab a smoothie from Smoothie King and Alex tells you more about who she is.

I apologize about the shakiness of the video – gotta get a better system worked out!

DO YOU WANNA GET MADE? GO TO THE WEBSITE:

Letsgetmade – The Brand of Motivation

WHAT IS LETSGETMADE?
LETSGETMADE is a Creative Consulting and Brand Marketing Firm specializing in design and media marketing. We are here to do one thing – take your brand to the next level. Our style is based on clean and impressionable visual content. Contact us and LETSGETMADE!

WHO IS MAC?:
Mac founded LETSGETMADE in 2013 and has already worked with several clients, notable companies and social media celebrities. He now manages the Hodgetwins products and YouTube.