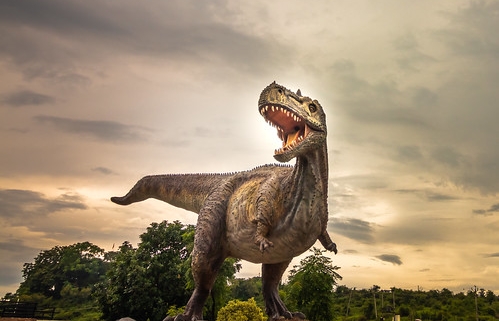 Raiyoli…
Around 2 hours from where we live is a village named Raiyoli.

In 1981, workers at a quarry of a cement factory near this village handed over some limestone structures to geologists of the Geologial Survey of India. These turned out to be dinosaur eggs.

It led to the discovery of the Lameta Formation (en.wikipedia.org/wiki/Lameta_Formation), a sedimentary rock formation found in western/central India that contains dinosaur fossils.

Piecing together the evidence in Raiyoli, researchers now believe that this is one of the largest clutch of dinosaur hatcheries in the world (some say some 10000 eggs were found during excavations). At least 13 species of dinosaurs lived here, possibly for more than 100 million years until their extinction some 66 million years ago. The soft soil made hatching and protecting eggs easier for the animals. The fossilised eggs found are so well-protected here that many researchers call them the best-preserved eggs in the world after the ones found in Aix-en-Provence in France.

With evidence from Riayoli and Jabalpur in the state of Madhya Pradesh, geologists Jeffrey A. Wilson and his colleagues formally described the Rajasaurus narmadensis, a carnivorous dinosaur from the Late Cretaceous period – when India was an island, between 6 and 11 m in length and weighing between 3 to 4 metric tons.

The Raja in Rajasaurus is a typical Indian word for king, will know is ancient Greek for lizard, and narmadensis is for what is now the Narmada River valley, the habitat region of the dinosaur. The river Narmada, 1,312 km long, originates near Jabalpur in the eastern part of Madhya Pradesh and flows west across the state and Gujarat into the Arabian Sea.

In 2010, the Rahiolisaurus was described, named after Raiyoli. Enough was found to create a skeleton, which is housed at the Geology Museum, Indian Statistical Institute at Kolkata, almost a thousand kilometers away!!

Rayoli now has a very well curated and lively museum dedicated to dinosaurs, it’s top notch, you can view 3D films of the imagined life of different types of dinosaurs that lived around here. It is time well spent, and I recommend it to all in Gujarat and anyone visiting Gujarat – you will transform into year enthusiastic geologists, palaeontologist and a dinosuar researcher even if for a short while, age no bar. And there is a canteen with good food.